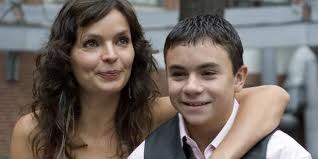 Anaïs Barbeau-Lavalette’s Le Ring observes a critical period in the life of Jessy (Maxime Desjardins-Tremblay) a twelve-year-old growing up in an impoverished brood within a Montreal ghetto. Mom (Suzanne Lemoine) is a strung-out heroin addict who shoots up between her toes and routinely neglects the family toddler, Dad (Stéphane Demers) works the graveyard shift at unsatisfying jobs for menial pay, and teenage brother Sam (Maxime Dumontier) teeters on the brink of juvenile delinquency; meanwhile, Jessy’s sister, 15-year-old Kelly (Julianne Côté) draws sexual interest from one of Sam’s dope-dealer friends and, horrifyingly, seems unable to distinguish between positive and negative attention from men. Jessy soon begins skipping school, losing himself in professional wrestling matches and self-anesthetizing with an ultraviolent video game.

On the surface, Le Ring’s compositional elements may sound routine, even mundane, but its execution is nothing short of magisterial. Barbeau-Lavalette’s first ace involved casting Desjardins-Tremblay in the lead. He has a uniquely embryonic look – the visage and body of a child capable of eventually evolving into a ruthless hood, but at the same time, big, deep, sensitive, searching eyes that exude a comprehension far beyond that of most children in pre or early adolescence. He’s instinctively appalled and repulsed by the ferment that swirls around him, and aches for deliverance, but also hasn’t an iota of wisdom about how to transcend – which underscores his naïveté about the authenticity of the wrestling. The action in the ring is a fantasia of early childhood, and in it, Jessy sees a career into which he hopes to escape – but it’s a dream built on shifting sand. We can size up the strength of the director’s grip on Jessy from the first 30 seconds, when she films Desjardins-Tremblay with a tracking shot, riding his bicycle from right to left while wheezing and panting – in other words, fighting to get ahead against the undertow that pulls him toward a dead-end life.

Le Ring exhibits influence by the work of Italian neorealists of the 1940s and ‘50s, and the movie can be read as one of the most successful transpositions of neorealist aesthetic and social criticism to the early 21st Century. Its closest antecedent is probably De Sica’s 1944 I bambini ci guardano, and like De Sica, Barbeau-Lavalette focuses her camera on a sad little boy with all of the odds stacked against him. But Barbeau-Lavalette is also more ambitious than De Sica: in lieu of ascetically exploring the catastrophic effects of one lousy mother, her view incorporates the whole sweeping social fabric that has produced a life as hopeless as Jessy’s – where a super-dysfunctional home is, sadly, only one of many crippling disadvantages all enshrouded by seemingly inescapable poverty.

Throughout, Barbeau-Lavalette keeps running into potentially stale narrative formula, but seductively dodges our expectations each time. For example, one sequence has a homeless friend of Jessy’s,  (Jason Roy Leveille) disclosing to the child that he used to work as a wrestling trainer, and we may fear that the film  is setting up some hokey triumph of the spirit subplot involving wrestling. Nothing could be further from the truth. Moreover, by giving each of the interpersonal relationships a unique spin, the filmmakers also manage to avoid cliché: for example, we observe the intimacy that gestates between Jessy and Kelly, each so desperate for connectedness that they end up sharing a bed together. Watching this sequence, you begin to grasp exactly how poverty and parental neglect have thrust both children into a state of unusual, potentially inappropriate closeness – for amid such circumstances, who else can each of them rely on as an emotional anchor? With their parents zoned out, and Sam neck-deep in criminal behavior, the brother and sister only have each other. The restraint in this sequence points to another of Barbeau-Lavalette’s gifts: that of understatement. Not only are there no big emotional payoffs, but the writer-director travels to the opposite extreme. A pivotal sequence between one of the children and the mom, for instance, is filmed not in close-ups but in a less intimate two-shot, and the most extreme signifier of what is happening – the mother’s face – never appears on camera; Barbeau-Lavalette films her with her back to us. We’re being asked to read into the events, which makes the emotional subtext of this picture more genuine, more tactile.

It should be said, as well, that the movie benefits from an aesthetic richness that permeates every scene. Philippe Lavalette’s camera establishes a basic grittiness that has been widely compared in the press to D.P. Barry Ackroyd’s work in the films of Ken Loach, but that only constitutes one-half of the equation. We also get sublime instances of visual poetry, such as the recurrent image of a warmly lit Montreal highway at night that lies just beyond the perimeter of skid row, with luxury sedans careening past Jessy’s neighborhood – and moving from left to right, which contrasts neatly and tellingly with Jessy’s bicycle ride in the opening scene.

If Le Ring errs, it does so only in the final ten minutes. On one hand, it’s understandable that Barbeau-Lavalette would want to end on a slight upswing after such unremitting bleakness. While she wisely avoids an inspirational ending, the final stakes that she and screenwriter Renee Beaulieu establish for Jessy are a shade too threatening; we can’t quite believe that he would make his eventual choices without the immediate imposition of external, physical danger.

That misstep notwithstanding, though, the film is virtually flawless. The fact that it emerged as a first-time effort from a director then 27 years old is almost incomprehensible, for Barbeau-Lavalette exhibits a command of the medium that some filmmakers only achieve after 15 or 20 years of craftsmanship. On many levels, Le Ring recalls Truffaut’s The 400 Blows, and it’s an equally impressive debut.