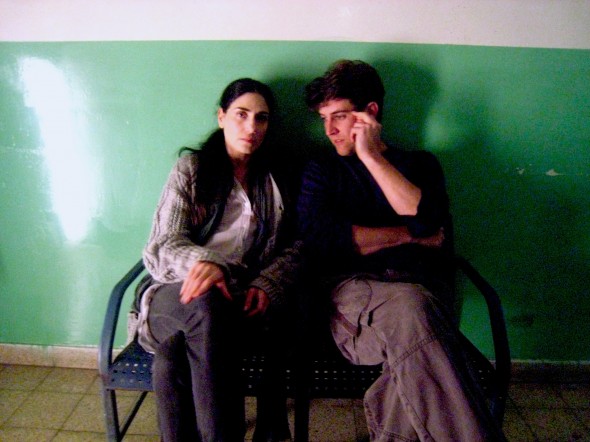 The Jack Naylor Award for Cinematography in a Feature Film

The award, in the sum of 10,000 NIS, was presented to cinematographer Philippe Lavalette for his work on the film Mabul by Guy Nattiv

The Jury: “One of the pleasures of watching Mabul was the sensitive and eloquent use of a visual cinematic language that holds layers and stories that the spoken language cannot contain. This twilight zone finds a fascinating cinematic expression in the camera of Phillippe Lavalette and the viewer finds himself partly swept partly drowning in the caressing light.”

The Rosko family lives on a ramshackle collective farm settlement along the picturesque Israeli coast, where their small but feisty 13-year-old son, Yoni (Yoav Rotman), is bullied at school. In between learning his Torah portion on Noah’s ark in anticipation of his bar mitzvah, Yoni sells completed homework assignments to his classmates to earn money for the body-building formula he hopes will bring on his delayed puberty.

Yoni’s fragile mother, Miri (Ronit Elkabetz, in a fine but atypically restrained performance), cares for toddlers at the community kindergarten and is surreptitiously carrying on with a neighbor. Meanwhile, his gruff, bitter father, Gidi (Tzahi Grad), a grounded pilot, whiles away time secretly growing and smoking marijuana.

When the institution housing the Rosko’s severely autistic elder son, Tomer (Michael Moshonov, “Lebanon”), suddenly shuts down, his parents are forced to retrieve him. Tomer’s uncontrollable behavior strains the delicate balance of his family’s lives and disturbs the Moshav community, ultimately forcing his parents and Yoni to confront repressed secrets and current sorrows.

As with the short, the heart of the feature is Yoni’s coming-of-age story and the relationship of the two brothers. As the quick-witted lad forced to act more like an adult than his parents, newcomer Rotman is a rare find, delivering a performance that is completely natural and convincing; Monoshov’s thesping (which earned the supporting actor kudo at the Israeli Academy Awards ) is physical and raw.

Working in a fluid, lyrical style in which the visual provides even more information than the verbal, Nattiv (“Strangers”) confirms his directorial chops, despite a happy ending that feels forced.

Easily one of the year’s most impressive-looking Israeli films, “The Flood” owes much to the superlative camerawork of France-trained, Quebec-based lenser Philippe Lavalette and the poetic editing of Tali Halter-Shenkar. Other craft contributions are first-class.